$800,000 in grants coming to childcare facilities in Vermont 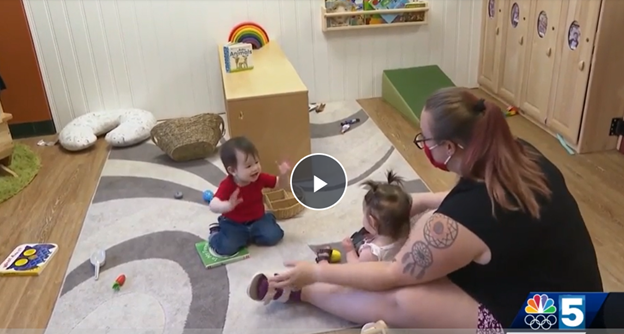 BURLINGTON, Vt. — As the state starts to reopen and more parents get back to working in-person, can they find accessible childcare? After much research, Let’s Grow Kids Vermont is saying they can’t.

"You lose your job, you leave your job, you make compromises, you never see your spouse again. It’s stress, it’s not helpful to Vermont or Vermont families," said CEO of Let’s Grow Kids, Aly Richards.

One person who understands that battle first hand is Al Koonz.

"I essentially was either spending huge periods of time, without my kids, not putting them to bed … and paying exorbitant amounts of money for childcare," said Koonz.

Koonz works 13-hour shifts as an emergency room nurse. As a single parent with two kids under 5 years old, getting the childcare Koonz needed became impossible.

"That became challenging. I missed a lot of work because I had to stay home with the kids for various reasons," Koonz said. "It was a combo of how much money I was spending on childcare and the combination of me not seeing my children enough as their primary care giver, it was no longer manageable."

This is a story Let’s Grow Kids Vermont is familiar with.

"There are folks that work nonstandard hours, and they need all the supports they can to be at that job — childcare being one of them. The national guard reached out. They have hundreds of vacancies. This is a crucial part of our state, and they cannot fill them. And a big reason is childcare,” said Richards.

That's why they have partnered with Vermont Child Development to provide $800,000 in grants for childcare facilities to expand.

"We’ve used Let's Grow Kids funds to expand. We would not be able to open up the programs that we have without the help from lets grow kids," said Sara Leblanc, owner of Next Generation Childcare.

Leblanc owns five childcare locations throughout the state. Her centers have received many calls in the recent weeks as more people are returning to work.

"Now that everyone’s coming out of the pandemic, not working from home as much, when you say your hours they’re like 'ugh!' you know? They work til 5, so they really need care until 5:30, 6. How do we fill that gap?" she said.

Childcare facilities can apply for grants until July 9th. All applicants are recommended to join an informational zoom call on June 10th. The funds can be used to hire more people, make renovations, and more. More information can be found at https://letsgrowkids.org/grants.