House lawmakers last month approved a substantial increase in funding for childcare services, but leaders in the Senate say they aren’t ready to commit to the proposal.

Vermonters who don’t have little kids at home might be surprised to find out just how difficult it is to find, let alone afford, childcare in this state; the shortage is so severe that House lawmakers want to pour about $10 million into the childcare system, to boost subsidies for parents, and to increase reimbursement rates for providers.

Click here to read and listen to this story on VPR.net.

As is often the case in Montpelier, however, other government programs are competing for those same dollars. And it’s unclear whether the Senate will go along with the House’s plan.

“I think at this point in the process, I can’t give you an affirmative answer on that,” Caledonia County Sen. Jane Kitchel said last week.

As the Senate Appropriations Committee begins budget deliberations this week, parents like Nina Lemieux will be pushing for more childcare 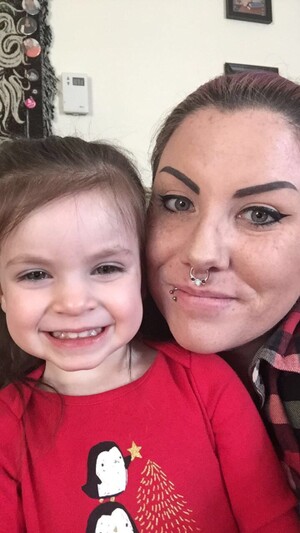 On a recent evening at their grandmother’s home in Barre, Lemieux’s three kids had piled themselves into a tangled mess of skinny arms and legs. They were definitely roughhousing, but 9-year-old Billie and 7-year-old Boston were careful to keep a soft hand with their baby sister, Brightlynn.

One big challenge with kids - even well-behaved ones like Lemieux’s - is that parents have to find a place to put them when they go to work. And back in 2017, the daycare where Lemieux sent hers closed its doors almost without notice.

Lemieux, a single mom who was working fulltime at the Department of Labor, suddenly had a problem.

“The amount of calls I made to the same daycares probably borderlined on harassment. It was like every two days I was calling, like, ‘Anything suddenly open up?’” Lemieux said.

Nothing did open up. And with no place to put her youngest child, Lemieux resigned from her job, to avoid having a termination on her record due to absences.

Lemieux , who’s 29 now, burned through her savings and her retirement, went on welfare and food stamps, and lost her apartment. And while she eventually found another daycare placement, she hasn’t come close to recovering.

“I worked my ass off to get to where I was,” Lemieux said. “And to have … literally everything just fall apart because we lost daycare, I just, I still don’t believe it sometimes. I’m like, ‘That can’t be a real thing that happened.’ But it is.”

“We have a childcare crisis here in Vermont,” said Sarah Kenney, director of policy at an organization called “Let’s Grow Kids,” which is trying to get elected officials to invest more public money in the childcare system.

There are about 36,000 children under the age of 6 in Vermont. And according to a 2016 report commissioned by the legislature, the parents of 25,000 of those kids “rely on some form of regular child care to maintain stable employment in the Vermont workforce.”

Kenney, however, said the report found there are twice as many infants and toddlers in the state as there are childcare slots to take them.

Childcare advocates have been shouting for increased public funding since that report came out. And this year, elected officials across the political spectrum are listening.

In January, Republican Governor Phil Scott proposed about $7 million in new funding for childcare subsidies. Reeva Murphy, deputy commissioner of the Department for Children and Families, said Scott’s proposal was based on his three-pronged approach to governance, “Which are to grow the economy, make Vermont more affordable and protect the most vulnerable.”

“And I think he really came to see in this second term that childcare is an issue that touches all of those priorities,” Murphy said.

Last month, the Vermont House of Representatives outdid Scott’s proposal by unanimously passing legislation that would pour about $10 million into the system.

Waterbury Rep. Theresa Wood, one of the bill’s backers, said the legislation was driven by an economic imperative.

“And so when you have families making a decision to not, you know, have one of the parents return to the workforce because it’s too expensive to pay for childcare, that reduces our workforce substantially,” Wood said.

The bill would help families who struggle to afford childcare by increasing funding for the Childcare Financial Assistance Program. And it would help boost capacity in the system by increasing the amount of money that providers get for providing subsidized care.

It would also address the shortage of childcare workers, by setting aside money for scholarships and loan forgiveness for industry employees.

Murphy said the governor is “fully supportive” of the House legislation.

But as the legislative session nears adjournment, proponents of the increased funding are starting to feel some consternation. That’s because Senate leaders, like Appropriations Chairwoman Jane Kitchel, have yet to say, ‘Yes,’ the House’s childcare funding plan.

Kitchel doesn’t argue that the childcare system doesn’t need more funding - of course it does, she said. But according to Kitchel, so do dozens of other important government programs. Like Reach Up, for example, the welfare program Nina Lemieux relied on when she lost her state job.

“We’re paying a family of three about $640 a month. It has not been raised in years,” Kitchel said.

Kitchel said elected officials have talked a big game about ending child poverty over the years.

“And yet at the same time we have as the result of our funding decisions thousands of children who live in abject poverty, and so those are very troubling discussions,” Kitchel said.

All told, Kitchel’s committee has about $200 million worth of funding requests in her committee right now that touch on pretty much every strand in the social safety net.

And Lemieux said she understands the tension Kitchel’s committee is navigating.

“I mean, I don’t disagree. Having been on Reach Up, I know that families don’t get enough,” Lemieux said.

But Lemieux says if she’d had childcare, then she wouldn’t have needed public assistance in the first place.

“When you build anything, you have to start at the foundation. You can’t start with the roof of the house first,” Lemieux said.

And when childcare crumbles away, Lemieux said, everything you’ve built on top of it falls too.