Stress and the Developing Body

Dr. Matt Rushford founded Rushford Family Chiropractic in 1994 with his wife and partner, Dr. Julieta Rushford Santiago. He is a member of the International Chiropractic Pediatric Association and specializes in pediatric and perinatal care. Dr. Matt has one of the few chiropractic practices in New England which is almost exclusively dedicated to caring for children and pregnant women. A sought-after speaker and writer, he has been published in Mothering magazine and Pathways for Family Health magazine.

Science tells us that the brain is developing most rapidly in the first few years of life, and that this development is influenced by early childhood experiences, both good and bad.

Just as severe stress can negatively impact the structure and functioning of the developing brain in young children, it can affect the developing body, as well—particularly what scientists call the “muskoskeletal system,” or a child’s bones, muscles, cartilage, tendons, ligaments, joints and other connective tissue that allow for movement and give the body its form.

When we become emotionally stressed, our bodies respond in the form of taking protective measures.1 This is part of an evolutionary adaptation that is very old, in which our muscles tighten and bodies distort in order to prevent catastrophic trauma. In all likelihood, most of the extreme stress we see in the bodies of infants and children are a complex blend of physical, emotional and psychological elements.

What body-based doctors like chiropractors know is that once these protective stress patterns are established in the body, three things tend to happen:

What we’re talking about is a positive feedback loop between the developing brain and the body, in which stress (particularly “toxic stress”) influences both brain and musculoskeletal developmental patterns, and the brain and body continuously tell each other to perpetuate the altered brain and body development.2 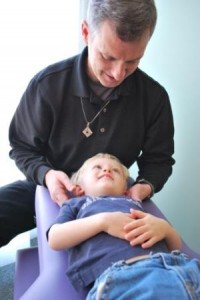 While attempting to “rewire” the brain is still very challenging, we can definitely treat the musculoskeletal system directly and measurably relieve embedded stress and tension patterns, align the tissues around the nerve system, and bring more ease into the person as a whole. This reverses the positive feedback loop and sends new signals to the brain saying that the body is no longer in “threat mode.” If you’ve ever felt mentally or emotionally “lighter” after a warm hug from a friend, then you’ve experienced this relationship between a physical event and emotional states.

Gentle, specific pediatric chiropractic treatments have been shown to directly lower the physical expression of stress or trauma, helping a child return to the state of ease that’s best for brain development. The positive effects of certain types of chiropractic treatment have been linked not only to consistent quality of life improvements on multiple levels of the human experience, but perhaps even more importantly, to more positive and productive decision-making in the long-term.3, 4

We know that quality early experiences from birth are necessary for healthy development in children.  For children who have experienced traumatic early experiences, simple, body-based therapies like pediatric chiropractic treatments can counteract the effects of stress, helping them achieve the health, wellbeing and future success they deserve.